A lightweight introduction to Recursion Schemes in Scala 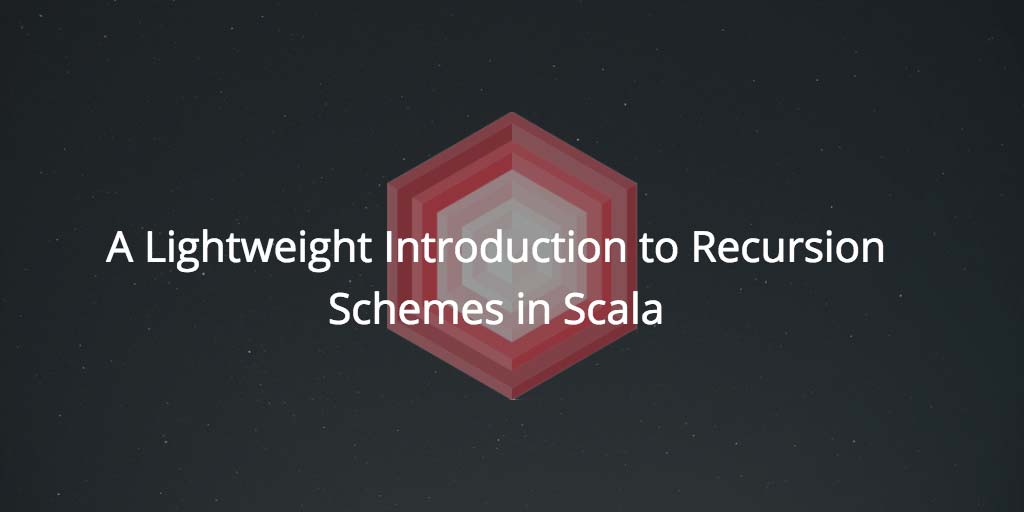 Last December, I attended a talk by Zainab Ali entitled Topiary and the art of origami. This talk focused how to write a decision-tree-learning program in Scala. Zainab showed how, from some non-recursive functions, one can raise a decision tree data type, a learning algorithm, and a predicting algorithm, each in one line. She could do this by using Matryoshka, a library that implements recursion schemes in Scala.

Recursion schemes are relevant in functional programming. Contrary to what the jargon suggests, they are not too difficult to understand. Here is a small-steps introduction to basic recursion schemes in Scala.

A simple and commonplace recursive data type is the List. Scala provides a List[A] type, which is generic on the type A of elements. Since recursion schemes work just as well with non-generic collections, for convenience I am using a numbers-only list type instead:

This List type is recursive because the Cons class has a value parameter which is a List itself. Here is the full code of this blog post example (with minor changes).

How do you add up all the numbers in a list? Since most functional languages have no while loops, one has to use recursion:

However, recursion should not be abused: it is too powerful and confusing, and can make programs difficult to read. This is why functional programming aims at hiding it behind higher-order functions like map or fold. Here is a fold for our List type:

Apart from the list, fold takes as parameters the result for Nil, and a function op used to combine the head of a Cons with the result of the recursive fold on the tail. We can now write the sum as a special case of fold, like this:

Now there is no recursion in the code of sum: it has been moved out of sum and into fold.

We can write a digits function, to get the list of digits ([0-9]) of a number, also using recursion:

Unlike in sum, in digits we use recursion to build a list. Nevertheless, like sum with fold, we can also take recursion out of digits and put into a higher-order function called unfold:

Apart from the seed, unfold takes as parameter a predicate to mark the end, and a function Int => (Int, Int) to split a seed into the value at the head, and the seed from which to build the tail.

fold and unfold are opposed: this grows a list from a seed, that reduces it to a result. However, there is a sort of symmetry between their definitions. To see this symmetry, we use an OCons type alias:

This OCons alias can describe an optional Cons, intuitively, if there is a recursive case (Some(Int, Int)), or a base case (None). We can write fold and unfold to work around this type:

Both fold and unfold now take as parameter a function on OCons, but with reversed types: in fold the function gets a number out of an OCons, whereas in unfold it splits a number into an OCons.

The new types of fold and unfold show another similarity:

So, we can see fold and unfold each as lifting a single-step functions, out or in, into a loop that performs that step many times.

Another recursive data type is the type of binary trees of numbers:

Unlike lists, the Tree type appears recursively twice in the Node subclass, for the left and right subtrees.

As we did for lists, we can write a sum function for trees, using recursion:

Unlike the sum for lists, here we have two recursive calls, one per subtree. Despite this, we can also take the recursion out of sum and into a tree-fold function:

We can write a function digits to lay the digits of a large number out in a binary tree, much like the digits function from Step 2.

As in the case of a list, we can extract recursion from the digits function into an unfold functions for trees:

Step 6: The optional node type for

Here, ONode intuition is if there is recursion or not. It has three instead of two numbers, because in a tree there are two recursive occurrences, not one.

Let us compare the fold-unfold functions for lists based on the OCons alias, with those for trees that use the ONode alias. We can see some similarities between them:

To highlight this similarity, we make OCons and ONode generic on a data type R, to mark the recursive positions.

At each type OCons or ONode, we can “apply a same recursive call to each recursive position” by using a map function:

These are very similar to the map function for the Option type.

The idea of a one-to-one translation from the cases of each data type to the cases of the Option alias, we can write with an open function for each type:

Using the functions open and map functions, we can now express the fold and unfold functions into a single line each:

These definitions of fold use a same map function to recursively apply fold or unfold to each appearance of the R type parameter.

Using the functions open, close, and map, we can write fold/unfold with a single line each:

Again, we use map to apply the recursive call to unfold at each appearance of the R type parameter.

So far, we have only focused on hiding direct recursion from functions. Can we do the same with data types? Yes, if we use a form of indirection.

In fold and unfold, the functions in and out functions represent one recursive step. Likewise, we can use the types OCons[R] and ONode[R] to represent one link in a list or tree. The type parameter R gives us the indirection that we need to cut recursion in each data type:

The List_Ind (resp. Tree_Ind) data type now consists of a single case class with a single parameter opt. The type of opt is the type operator OCons (or ONode) applied to the data type List_Ind (or Tree_Ind) itself. Thus, we have shifted recursion from values to types.

For the List_Ind and Tree_Ind classes, we can write the following fold and unfold functions:

The two fold functions (resp. unfold) are almost the same, and they only differ in the type operator (OCons vs ONode), and in the map function (mapOC vs mapON) for it. Note that, since List_Ind and Tree_Ind already use OCons and ONode, we no longer need the auxiliary functions open and close.

Now we can unify List_Ind and Tree_Ind into a single Ind case class, which generalizes indirect recursion in the data types.

The Rec[_] symbol means that Rec generalizes type operators, like OCons[R] or ONode[R], which themselves take a type parameter R.

We can now turn List_Ind and Tree_Ind each into a special case of Ind:

We also have to unify mapOC and mapON into a function map for Rec[_]. However, since Rec[_] is generic, the map must be provided as another parameter of the function. A common way to do so is to wrap the map inside a trait, usually called a Functor, which is also generic on Rec.

Now we can use these functions as a fold and unfold for lists, trees, or any data structure we need.

After all of the previous steps, what we have is the following:

The class Ind[Rec[_]] is generic on the Rec[_] type constructor, which means that it can represent not just lists or binary trees, but also any directly recursive data type.

The notions and intuitions we used above have some special names.