The rest of the changes can be found in the Scalafmt changelog.

Dale Wijnand submitted a PR to add support back for trailing commas. He lovingly refers to it as the glorious return of “Comma McTraily” (but let’s face it, Boaty McBoatface still reigns supreme). The PR would add trailing comma support to tuples, argument and parameter groups including for implicits, for functions, methods and constructors, and import selectors, according to Wijnand.

He’s currently working on the SIP with additional features.

You can view more about SI-4986 here: SI-4986 The Glorious return of Comma McTraily

The much hyped Dotty officially has a website as of June 21st.

The new compiler supports the evolution of the Scala programming language, builds on DOT in its internal data structures, and expresses generics as type members.

“Dotty is a platform to try out new language concepts and compiler technologies for Scala. The focus is mainly on simplification. We remove extraneous syntax (e.g. no XML literals), and try to boil down Scala’s types into a smaller set of more fundamental constructors. The theory behind these constructors is researched in DOT, a calculus for dependent object types.”

While Dotty is usable at the moment, they warn there is no guarantee of it’s stability at this point. It currently interops with libraries compiled with Scala 2.11.

You can view more about Dotty here: Dotty

ScalaBridge is a movement to build an inclusive Scala community to support women in programming and offer introductory workshops.

Kelley Robinson of Sharethrough announced the launch of the website and casually threw in that ScalaBridge.org was not written in Scala.

You can view more about ScalaBridge here: Scala Bridge

Miles Sabin presents an overlook of what’s in store in 2016 for the Typelevel community, projects, and events. He also gives insight into the colloborations between Algebra, Spire, and Cats; Cats and shapeless; shapeless and sodec, doobie, ScvalaCheck and Circe. 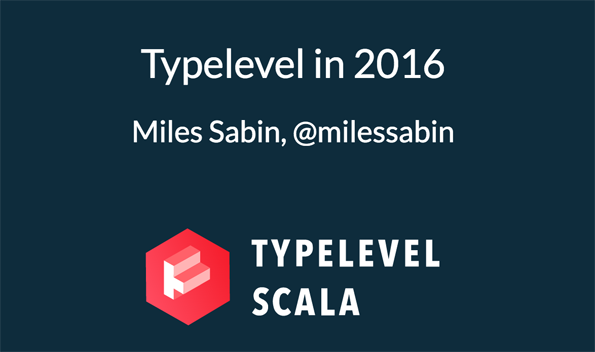 Konrad Malawski presents a deeper look into Akka Streams (the implementation) and Reactive Streams (the standard).

He explains, “The term streams has been recently pretty overloaded, so we’ll disambiguate what streams are and what they aren’t. We’ll dive into a number of real life scenarios where applying back-pressure helps to keep your systems fast and healthy at the same time. We’ll mostly focus on the Akka Streams implementation, but the general principles apply to any kind of asynchronous programming.”