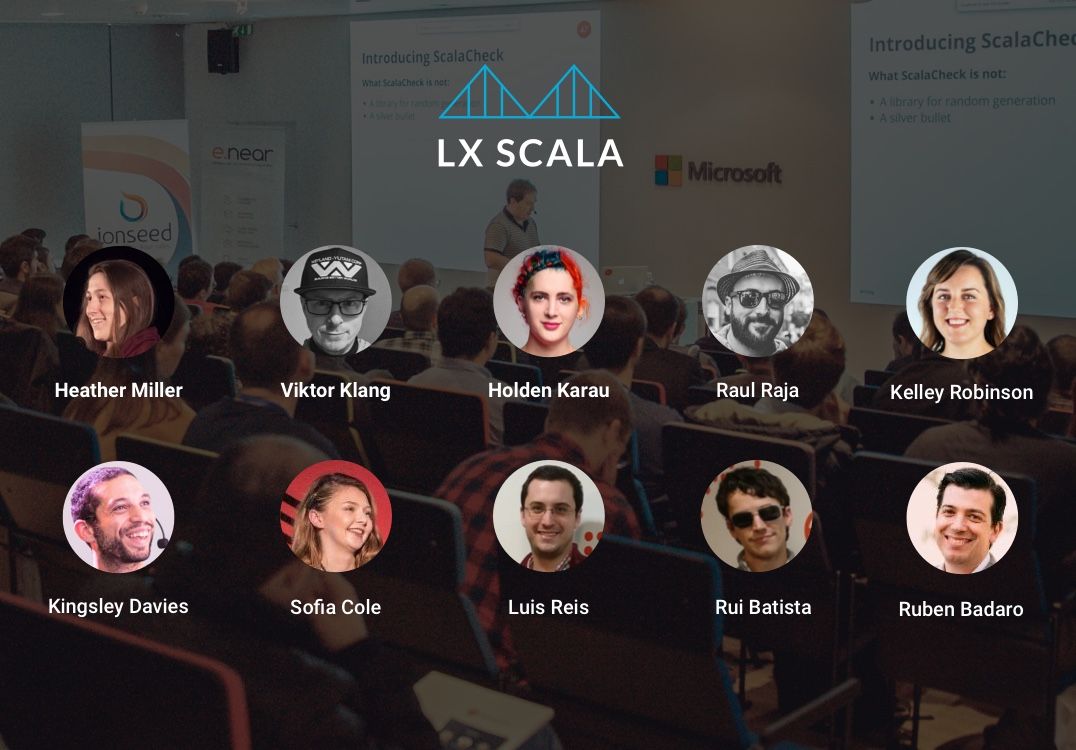 For the second year in a row, we’re bringing the Scala magic to Lisbon, Portugal with LX Scala 2017! Join us on May 12th for a Meetup of epic proportions - one day, one track, and one awesome community.

We’ve curated a line-up of speakers from the Scala Community that we’re pretty excited about, and we hope you are too.

Heather will be kicking things off for this busy day. Talk title and description to be announced at a later time.

Heather is a founder and the Executive Director of the Scala Center at EPFL in Lausanne, Switzerland, and an assistant clinical professor at Northeastern University in Boston. She recently completed her PhD in EPFL’s School of Computer and Communication Science under Professor Martin Odersky, where she was a member of the Scala team.

You can find her at @heathercmiller and on GitHub.

We accosted Viktor to speak at LX Scala when he stopped by our Seattle office (sorry!). Luckily, he agreed to join us and will be giving out the closing keynote which will be announced at a later date.

Viktor Klang, Also known as √, is a passionate programmer with a taste for concurrency paradigms and performance optimization. He’s the Tech Lead for the Akka project at Lightbend.

You can find him at @viktorklang and on GitHub.

Holden Karau is transgender Canadian, and an active open source contributor. When not in San Francisco working as a software development engineer at IBM’s Spark Technology Center, Holden talks internationally on Spark and holds office hours at coffee shops at home and abroad. Holden is a co-author of numerous books on Spark including High Performance Spark (which she believes is the gift of the season for those with expense accounts) & Learning Spark. She is a Spark committer and makes frequent contributions to Spark, specializing in PySpark and Machine Learning. Prior to IBM, she worked on a variety of distributed, search, and classification problems at Alpine, Databricks, Google, Foursquare, and Amazon. She graduated from the University of Waterloo with a Bachelor of Mathematics in Computer Science. Outside of software she enjoys playing with fire, welding, scooters, poutine, and dancing.

You can find her @holdenKarau and on GitHub.

In this talk, we’ll learn about Freestyle, a library that enables building large-scale modular Scala applications and libraries on top of Free monads/applicatives. We will discuss some of its design choices and some of its main features such as:

Raul Raja is Functional programming enthusiast and CTO of 47 Degrees. He’s a self-driven software engineer with strong backend Scala experience. He’s a master at creative problem solving and is always looking to try out the latest in technology.

You can find him at @raulraja and on GitHub.

Why the free Monad isn’t free

Scala developers love to discuss Monads, their metaphors, and their many use cases. Recognizing that monadic design and development patterns have their place, this talk will discuss the price of implementing the Free Monad in your code - spoiler alert - it’s not free. We will define the Free Monad (while proving you don’t have to be an expert in category theory to understand) and give you the confidence to know when it is is not the answer in your code. We will also provide alternatives that provide greater maintainability and discuss the tradeoffs in performance and design.

Kelley is Scala developer, most recently working with data and infrastructure at Sharethrough in San Francisco. She also founded ScalaBridge, an inclusive Scala community with introductory programming workshops for women. In her spare time, she enjoys testing new recipes and trying to keep her plants alive.

You can find her at @kelleyrobinson and on GitHub.

Functional streams with Kafka: A comparison between Akka-streams and FS2

Kafka is a distributed streaming platform whose main strength is the ability to serve as the single message hub for applications of massive scale. It relies on a topic-based publish-subscribe model, where each topic may have multiple partitions to be consumed/published from/into. Kafka diverges from regular message queues in a lot of its functionalities. A significant change from other standard message queues is that each consumer has an associated offset, representing the identifier of the last consumed message from the subscribed topic. This allows for replaying of messages in cases of failures, deployment issues, and other occurrences. How can fully functional applications interact with Kafka and its features while maintaining the characteristics of the functional domain? The Scala ecosystem has many stream-based frameworks that can be leveraged to use Kafka. Two of the most used are Akka-Streams and FS2. These frameworks imply different approaches for processing data streams and dealing with Kafka’s features. The goal of this talk is to provide insight into these differences, in terms of functionality, performance, and their impact in maintaining the code, keeping it functional, robust and readable.

Luis Reis is a 28-year-old software engineer from Lisbon, Portugal. He holds a master’s degree with a major in Distributed Systems and Data Engineering. Aside from his love of programming, he has a strong passion for building software that coordinates distributed systems into achieving a single purpose: provide insight into critical business decisions by processing large quantities of data. Scala has been his recent tool of trade due to its expressiveness and declarative nature.

You can find him at @luisreis and on GitHub.

Rui Batista is a 29-year-old developer from Lisbon. He’s worked in Scala for over three years. He especially loves making the Scala compiler work for him, leveraging Scala’s rich type system and expressiveness to produce better and more beautiful code. He consistently advocates for generic and functional solutions, based on libraries such as Shapeless and Cats. When he’s not working, he likes to play music and hang out with his guide dog Godiva.

You can find him on Linkedin and on GitHub.

Microservices have become one of the main sweet spots for Scala development teams. What frameworks are out there to make delivery teams more productive? How do the stacks, stack up? And what are the important factors for comparison? In this talk, Kingsley and Sofia will compare half a dozen of the main microservice frameworks, considering factors from ease of use and supporting documentation to programmer joy. If you’re new to microservices or the Scala framework landscape, or just want to see an interesting, fast paced and fun presentation this is for you.

Kingsley is a Partner at Underscore consulting, and has spent over a decade designing, developing and supporting large scale systems for a number of clients including, Betfair, the BBC, Barclaycard and others that don’t start with a B ;-) While working to make things better, he’s seen a steady evolution towards functional programming, a sharper focus on development operation teams and tools and decomposing big things into smaller composable things commonly called services.

You can find him @kings13y and on GitHub.

Sofia is a software developer at ITV, working on building micro-services in Scala. Scala has been an exciting new challenge, and a skill she is keen to develop further. She enjoys doing fashion hacks based on social media, walks in Richmond park, and exploring London’s best brunch spots.﻿

You can find her @sofiacole35 and on GitHub.

Ruben Badaro is a software engineer and manager working at Morgan Stanley in London building the firm’s new risk system entirely in Scala. In the past he’s worked at UBS in low-latency trading systems in Java, built machine learning products in a startup in Dublin and previously founded the Portuguese Java User Group (PT.JUG). In his free time, he enjoys spending time with his family and learning about shoes.

You can find him at @rbadaro and on GitHub.

Ready to join us?

There are a limited number of tickets available for this event, and it will sell out fast! Make sure to grab yours today, they’re a steal at 50 EUR!

We’ll have more on these speakers leading up to the conference. Follow us @lxscala and @47deg with #LXScala for all the latest event news!