Mu in the cloud 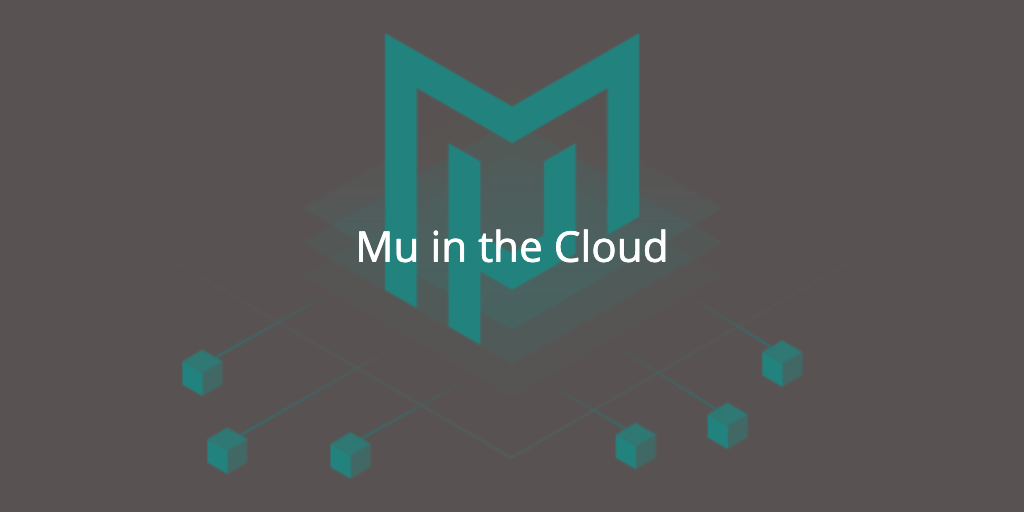 This is the fifth article in an ongoing series about the Mu open source library for building purely functional microservices.

In this post, we’ll cover how to integrate a Mu application with Kubernetes and the cloud, concretely by deploying it into Google Cloud Platform.

We are going to simulate the behavior of a smart home. We will have a device that will send our geolocation to our house using Mu. The house will then perform various functions like starting/stopping the robot vacuum cleaner, turning the lights on/off, or enabling/disabling the security cameras.

Also, our smart home server will stream all this geolocation data to pubsub in Google Cloud. Then, this data will be stored in a BigQuery table and, finally, we will be able to visualize this data in BigQuery Geo Viz. You can check the code in the Mu smart home repository. 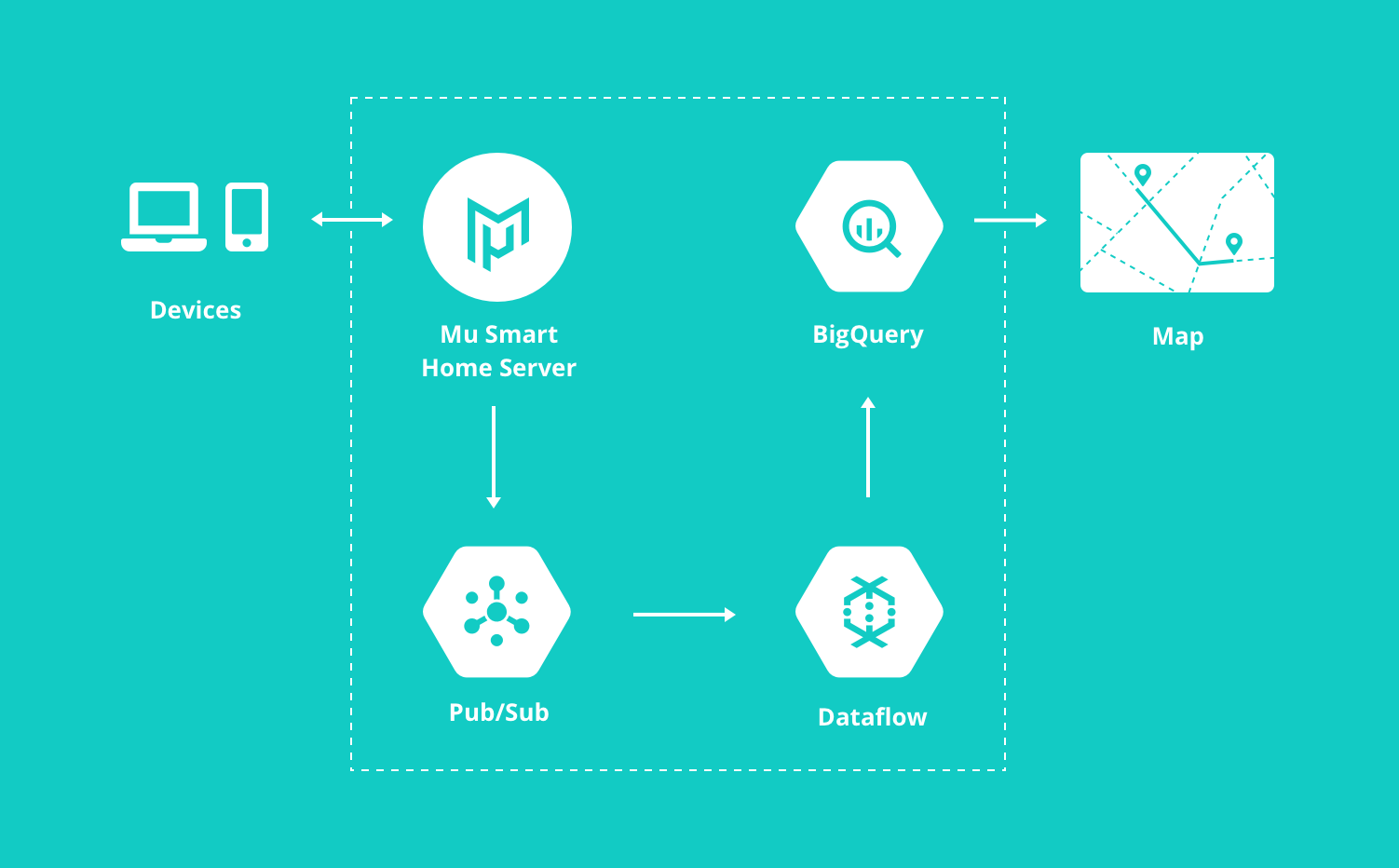 The smart home server will be located in a Kubernetes cluster.

Although we are not providing details in this blog post, these are some of the tools that are needed:

Let’s start creating a fat-jar and then dockerizing it. Instead of doing this in two steps, we will use the multistage feature of docker, and we will package our app inside of docker.

But first, we need to create the fat-jar. A Mu application works like any other Scala app, so we can add the sbt-native-package plugin, and then modify our build.sbt, enabling the fat-jar packaging to our server submodule:

You can learn more about this plugin here. Now we are able to create a zip file that will contain the fat-jar and a run script using a new sbt stage provided by the sbt-native-packager called universal:packageBin. Using this, we can create our Dockerfile:

You can test it locally with:

Once you have your image built, you can start it with:

Now it is time to create the infrastructure of our application in Google Cloud. To do this, we are going to use Deployment Manager and jinja templates.

For our smart-home project, we will need the following services:

All the resources above are described in the jinja files inside of the deployment folder in the smart-home repository. All will be called by the cloudbuild.yaml when we run the following command:

This creates a deployment called mu-example, described by the file cloudbuild.yaml. This file contains a collection of resources (listed above) that can be created or managed. In this case, the deployment contains seven resources, and all of them are managed by the Deployment Manager tool from Google Cloud.

This single configuration file is quite useful for our example because it provides the real values to our jinja templates.

From all the resources described above, let’s focus on two of them: the service account and the deployment of our Mu application.

A service-account is an identity that an instance or an application can use to run API requests on your behalf. This identity will be named mu-example-service-account, and it will be used in the deployment of our pubsub:

Well, the answer to this question is quite simple. From a service-account, you can create a private-key file in json format. This file must be assigned to an environment variable called GOOGLE_APPLICATION_CREDENTIALS. Then, our Mu app will use this just-created variable to connect with pubsub with the right permissions. But now the problem is: how can we translate it to an automatized deployment in gcloud and kubernetes?

The first step is, when the service-account is created, extracts its private-key:

As you can see under the outputs field, we are creating a variable called privateKeyData with the json private-key of the service-account. This value can be used by the cloudbuild.yaml, using this as a parameter for the deployment of other resources.

The second step will be the creation of a Kubernetes secret so the value of the privateKeyData will be available inside of the cluster:

We call our secret pubsub-key and we store the privateKeyData in a file called key.json. Now we can assign this to an environment variable in the deployment of our Mu application:

What we are saying above is that we are using a volume called google-cloud-key that contains the secret pubsub-key.

Then, we have a container called mu-smart-home-server which exposes the port 9111 and uses the volume google-cloud-key in a specific path.

Finally, we are assigning the needed environment variable with the file stored in the secret, which is the private key from our service-account. With this, our Mu application has the right permissions to publish in pubsub!

Now we can continue with the result of our deployment. As soon as it is finished, you can get the credentials for your Kubernetes cluster with:

With these credentials, you are able to connect to your cluster from your local machine using kubectl. For example, now you can check the pods that you have in your cluster with:

You should see something like this in your terminal:

Those are the two replicas of our mu-smart-home server. Since we created a LoadBalancer service for this deployment, we can also do

and extract the external IP and the port exposed. We can use these values to configure our mu-smart-home client locally. But before starting our client, let’s create our Dataflow function so the data streamed to our pubsub topic, by the server in Kubernetes, is also stored in a BigQuery table.

From the Dataflow menu, we can create a new job from a template. The template that we will use is the one called Cloud Pub/Sub Topic to BigQuery as shown in the following image: 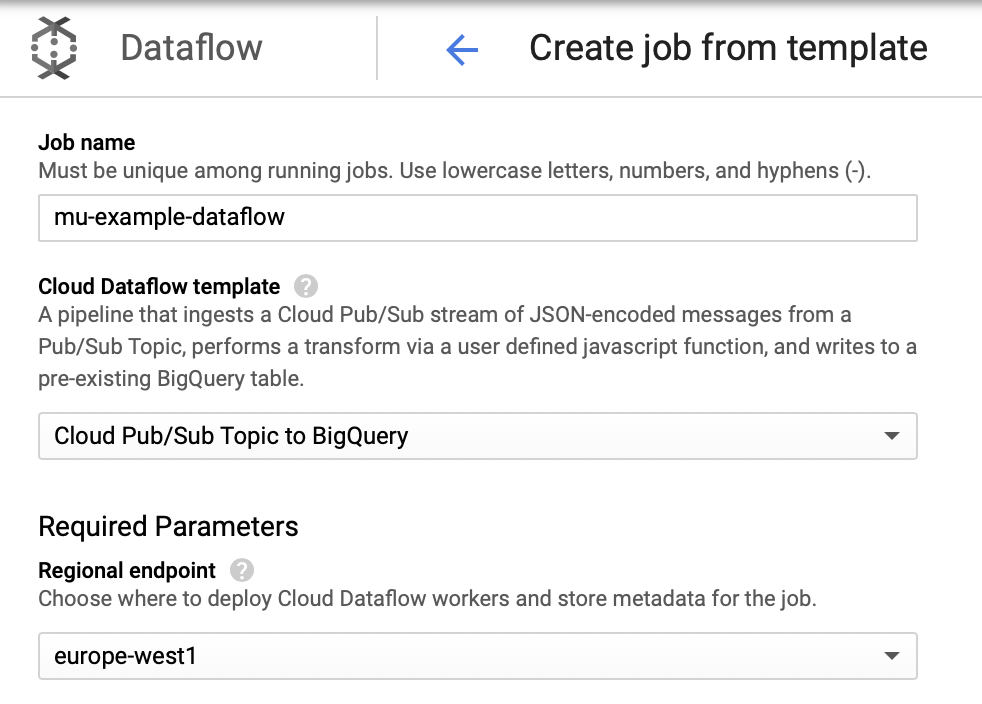 Once we have everything configured, we can run the job. Now, when we start our client and it begins to send data to the server allocated in the cluster, our data will also be stored in the table, so we can select it. 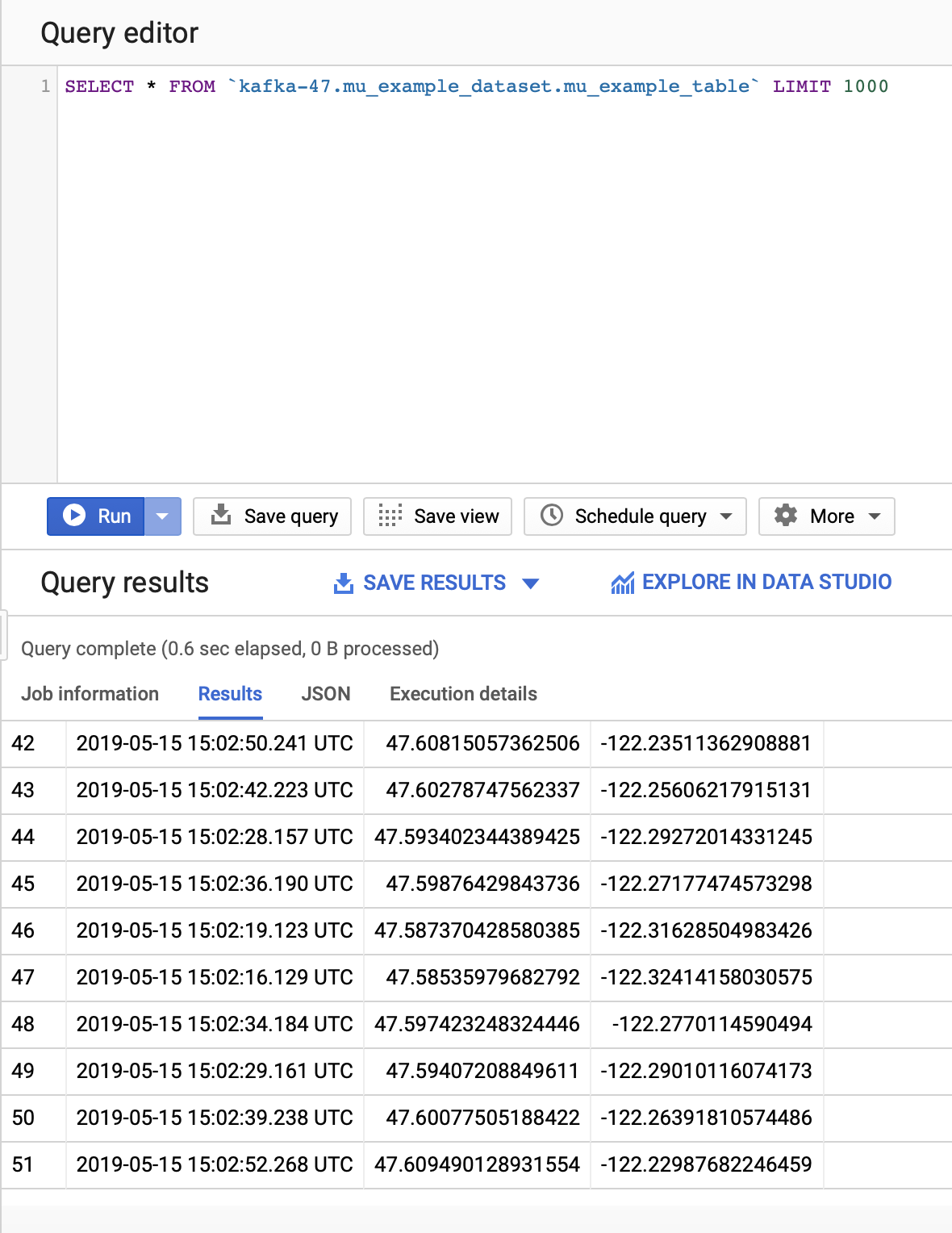 But we want this data as geographic coordinates so we can visualize it on a map. To do so, we can execute the following query:

In BigQuery Geo Viz we can execute this query and we will have the following map: 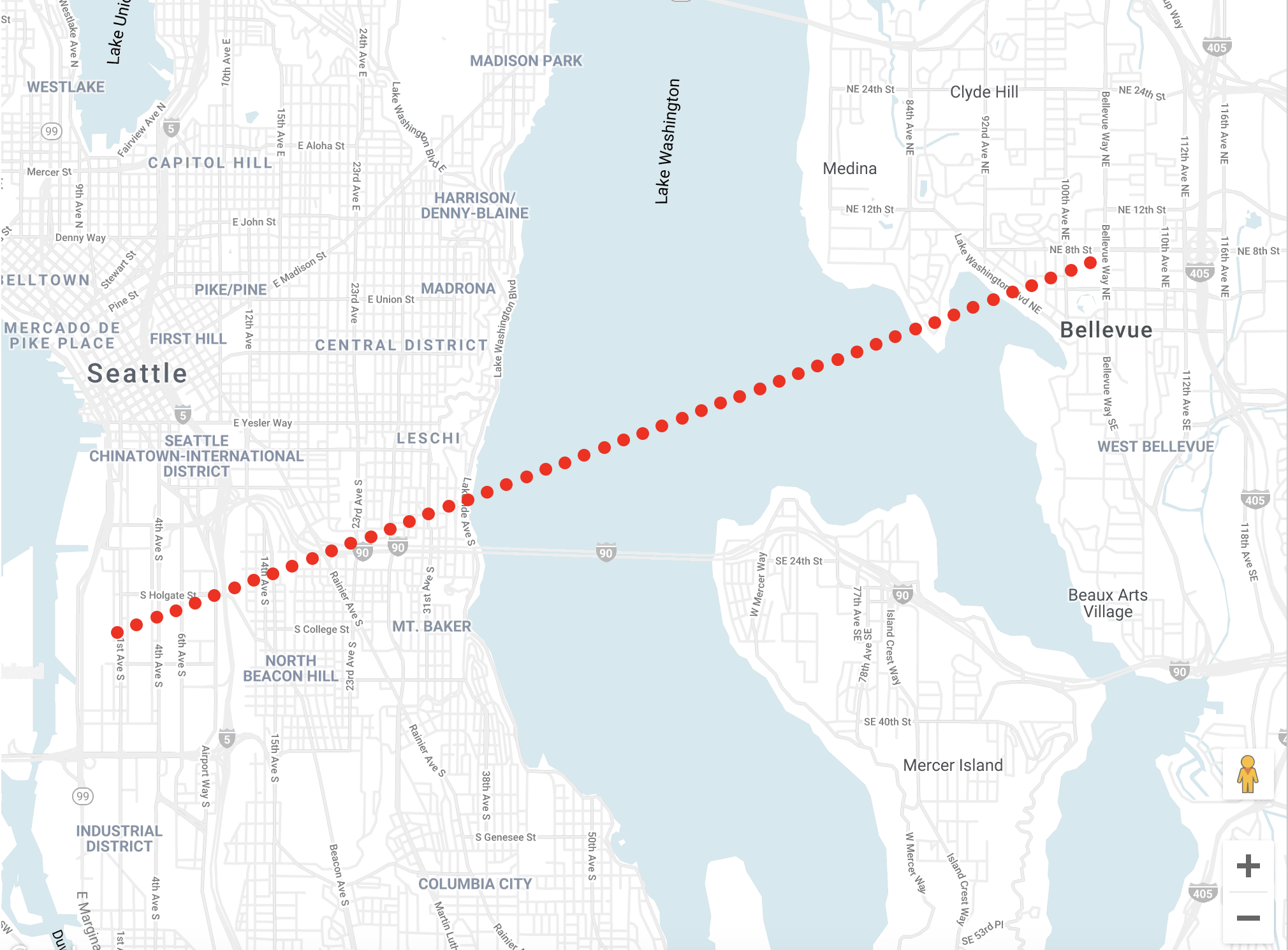 Finally, do not forget to remove all resources that you have created. You have to stop the job in Dataflow and remove the deployment with:

You have seen in this post how easy it is deploying a Mu application into a Kubernetes cluster allocated in GCloud. Since Kubernetes is agnostic to the cloud, you can do the same in any other provider like Azure or AWS, using alternatives to PubSub like Event Hub or Kinesis.

Have questions or comments? Join us in the Mu Gitter channel. Mu is possible thanks to an awesome group of contributors. As with all of the open source projects under the 47 Degrees umbrella, we’re an inclusive environment and always looking for new contributors, and we’re happy to provide guidance and mentorship on contributing to, or using, the library.