The Road to (Functional) Reactive Programming in JavaScript, Part 2 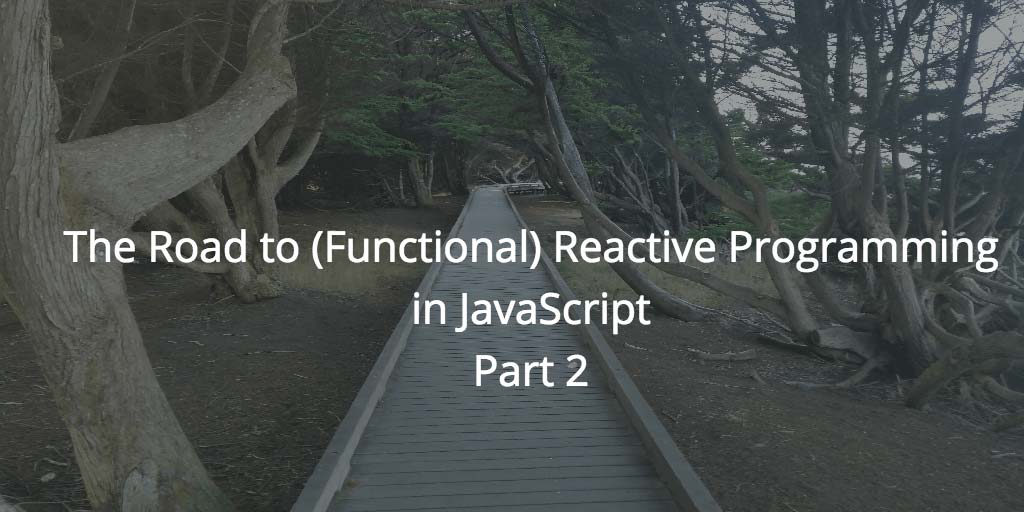 This is part two of a three-part series on the road to reactive programming in Javascript. This road is comprised of:

After taking the path so far into account (covered in part one), we’re going to review the different architectures available for managing asynchrony flows. In essence, they all rely on these two categories:

What is a callback?

We’ve seen this term before. But in reality, callbacks don’t exist. As we know, a callback is just a way of naming a JavaScript function given a specific context. Usually, callbacks are used on I/O operations, e.g., download data, read a file, fetch a database, etc.

The trip to the server won’t happen now; it takes time. So for now, just remember that you will get this result later.

The correct way of handling this is by passing a (callback) function to the fetchJSON function, which will run when the data is fetched (or not) and available. The readJSON callback is just a way to store some things to do at a later time.

This being said, it is very important to understand how a callback works, because any other construct on the language are just iterations on this concept or just sugar on top of it, but behind the scenes, there’s always a callback, ergo a deferred function.

What is a promise?

Native Promises have been supported in JavaScript since the ES2015 spec. They represent the eventual completion (or failure) of an asynchronous operation and its resulting value.

Promises uninvert the inversion of control of callbacks, restoring trustability/composability. They don’t get rid of callbacks, they just redirect the orchestration of those callbacks to a trustable intermediary mechanism that sits between us and another utility.

With promises, you can write async code that still appears as though it is executing in a top-down way, which helps our brains plan and maintain async JavaScript code better. They also handle more types of errors due to an encouraged use of try/catch-style error handling.

Promises represent a great step forward in comparison to callbacks. Even so, promises still have limitations:

What is a generator?

Generators are another concept introduced as part of ES2015. They are a special function type that does not run-to-completion like normal functions.

Instead, the generator can be paused in mid-completion, entirely preserving its state without pausing the whole program. It can later be resumed from where it left off, but, it doesn’t necessarily ever have to finish.

Generators don’t entail asynchrony per se, but when combined with promises, their power is immense. To do this, an auxiliary function, run in our case, and boilerplate is needed. This technique, at the cost of slightly more complex code, lets your async code appear to execute in a top-down fashion, in a more understandable way than when using promises alone.

The yield/next dualism is not just a control mechanism; it’s a two-way message passing mechanism too. A yield expression pauses waiting for a value, and the nextcall passes a value (or implicit undefined) back to that paused yield expression.

Generators’ power goes far beyond async flow control, but their benefit in this regard is the ability to express our code in a sync/sequential fashion. This lets us reason much more naturally about the code, hiding potential asynchrony behind the yield keyword, and moving that logic where the generator’s iterator is controlled.

Also, in contrast with single promises, you can emit multiple values over time, or write code that looks like it’s running in parallel. The setback to the use of this technique is either the needed help of an auxiliary library, or either boilerplate generated.

Async functions are an ES2017 feature that further wrap generators and promises in a higher level syntax.

These can be considered as the conjunction of generators yielding promises, but with an adapted syntax that lets you combine those two concepts with no boilerplate.

As you can see, there are no special calls, meaning no need for a library utility or messing with generator function declarations anymore. Now run() is a new kind of function: an async function, and instead of yielding a promise, we wait for it to resolve.

This architecture combines promises with sync-looking flow control code. The best of both worlds combined, effectively addressing almost all of the major concerns we outlined until now.

We can say that async/await feature is the epitome of asynchronous control flow in JavaScript. And indeed, you probably won’t need anything else to solve other concerns with async code around.

Today, requirements for webapps continue to grow and face new challenges like managing continuous streams of incoming data, or having to constantly poll something like a mouse position or a device’s gyroscope information. While not very common in classical webapps, these things can actually be managed through async/await, or even with generators and promises.

But, it just so happens that there is a pattern that adheres to these concepts relatively directly: Observables.

Next, in this series, we’ll continue to the final phase of our journey: streams and the observer pattern. You can read it here.