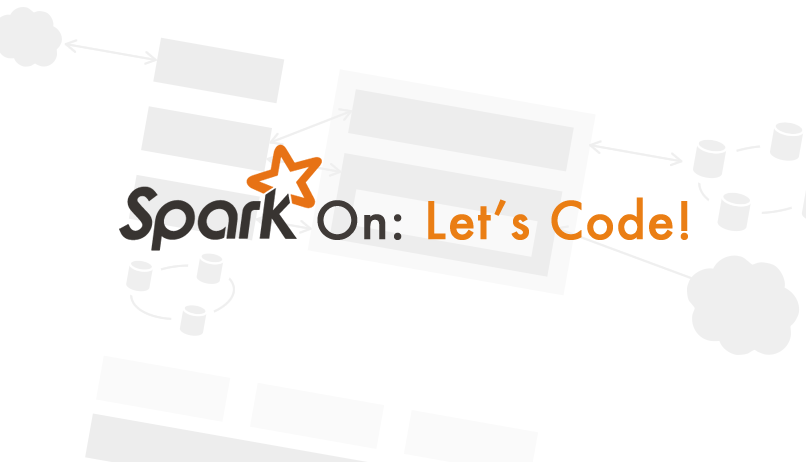 Big Data has become one of the hottest topics and challenges for many companies as dealing with large quantities of data in real-time is often a necessity these days. Spark is one of the most popular frameworks used to resolve problems arising during the processing of Big Data.

At 47 Degrees, we started using Spark to concretely provide real-time streaming data for some of our projects. There’s an abundance of benefits to using Spark which is why we decided to launch a series of articles on our experiences and how you can benefit from this framework. First, we’re going to create a problem that we can deal with, in this case, we’ll use the Twitter Streaming API because we know it’s an infinite source of data. Then we’ll begin by discussing how we can codify our solution. Later in the series, we’ll dive into distributing, deploying, and monitoring these kinds of applications.

Although there are several ways to achieve the same result, we will use this proposed solution where the main points are as follows: 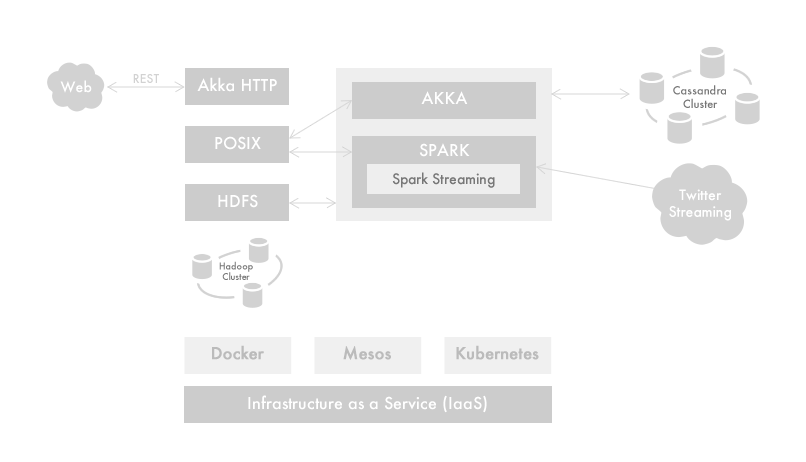 As a note, we will discuss this on a deeper level when we cover the infrastructure in a later article. For now, let’s focus on the code.

Spark, Participants, and some Concepts

For those of you who aren’t familiar with Spark, we’ll explain the different components within the Spark Cluster.

The Spark Driver handles the configuration of the cluster, preparing the context and declaring the operations over the Resilient Distributed Datasets (RDDs). In addition, it’s responsible for creating tasks and submitting them to the workers for execution. Essentially, it acts as the coordinator for the different job stages.

The snippet above is an example of how a Spark Context is initialized.

Worker nodes (also referred to as slaves), allow us to scale out our Spark Cluster, if we need to, by increasing the number of available worker nodes.

A worker node can run one or more executors, which can be explained as a process within the worker node.

The above example depicts how to create a parallelized collection with numbers ranging from one to five. Thus distributedData can be operated on, in parallel.

Each executor runs tasks using the CPU, memory and disks over the worker nodes. The executors have assigned resources to run these tasks. Hence, a task can be considered as a unit of work that will be sent to one executor.

Following with the distributeData example, Spark will run one task for each partition of the cluster. For instance, for the reduce operation, Spark will break the computation into tasks to run on separate machines. Each machine runs both its part of the map and a local reduction, returning only its answer to the driver program (Spark Driver).

A quick look at Spark Streaming

As you can see in the Spark docs, Spark Streaming is an extension of the core Spark API that enables scalable, high-throughput, fault-tolerant stream processing of live data streams. Taking this into account, the “glue” components to interconnect those participants in our model would be the following:

We passed through these concepts relatively quickly, so we encourage you to look at the Cluster Overview in the Spark docs for further details

Who’s who in our Model

Let’s briefly sum up the correspondences in our example:

Regarding the Spark Streaming:

Let’s take a quick look at how this works:

Now let’s dig into the code. The following set of lines serve as the entry point of our application where we can see the component dependencies:

This works to satisfy our API HTTP Services:

In short, we are saying our application needs to have:

In addition, we have provided the following helper trait, where we configure the Spark Context and create the Streaming Context:

Notice that the createStreamingContext function will create a StreamingContext by providing the configuration necessary for a new SparkContext. In this case, it’s based on the previous configuration (SparkConf) and the predefined batch duration, which is directly related to the time interval at which streaming data will be divided into batches.

The REST API is quite simple and has just three endpoints:

You can take a look at the entire implementation in the repo code: com.fortysevendeg.sparkon.api.http.ApiHttpService.

Given our entry point, let’s talk about our custom Twitter receiver. As you can see in the following piece of code, we are defining a new class TwitterInputDStream extending from ReceiverInputDStream. This provides an interface to start an InputDStream on the worker nodes and will receive all of the data on those nodes instead of in the Driver node. This is an important difference in respect to the InputDStream because this one is directly executed on the same node as the driver program. This could be a major issue if we receive huge quantities of information as the Spark Driver node would be overloaded, and the system would eventually fail.

In the code above, we overrode the needed method getReceiver from the ReceiverInputDStream class, providing a new TwitterReceiver instance. As an additional note, we’re passing an important parameter called storageLevel, which as the name suggests, defines the RDD storage level used to persist or chat the datasets across operations. There are several possibilities including on disk, in memory, serialized or not, etc. You can find the whole reference here: RDD Persistence.

Below is the custom receiver class definition:

Each custom receiver can be defined by defining the methods onStart() and onStop().

In this example, we’re delegating the responsibility of start/stop streaming into an FSM Actor. If we examine the docs further, we will be able to see that the FSM Actors are based in Finite State Machines (FSM), which the Erlang documentation says:

It’s true that we could just use a single class with a var status or even use a custom ActorStream Receiver, but it was amusing doing in the FSM Actor way. As you can see, we’ve added nothing related to the actor supervision or cluster failover strategies, keeping the example simple.

I know the code is self-explanatory, but let’s briefly summarize it anyway:

Here is where Spark offers its real power. It’s able to manage, in a faster way, huge quantities of data in near real-time fashion. In our simple example, we’re going to apply a couple of transformations to our batches of data that are coming in from the streaming.

Given the dsStream, which we pointed out earlier, is no more than a continuous sequence of RDDs (of the same type Status) representing a continuous stream of data from the Twitter Streaming API.

In a short, we would say that the following functions are quite similar.

Both functions have been implemented as follows:

In our streaming application, within the spark context, two parts might fail:

This section could be an article in itself, so in the meantime you can read more about it in the spark docs reference here.

That’s it for now! So far, we’ve looked at how Spark framework helps with big data processing in a very simple way. We’ve just reviewed how one of the most famous streaming data sources ingests information, and without a doubt, this process will keep our code simple in similar scenarios.

This is a simple example, but throughout this series, we’re going to see how this architecture becomes a real solution. We will also talk about the new features in the Spark 1.5.0 release, like Backpressure. Finally, we will analyze the ingested data and deploy the project in a real cluster and cover topics such as data recovery and system monitoring. Stay tuned!

You can check out the entire code here.

Refer to the Spark Streaming Programming Guide for more information.